Perfection Is Beyond Perception

It was April last year when I accompanied my mother-in-law to AIIMS, Delhi for her brain tumour treatment. On the day of her operation, we reported on time as per instructions given and after having done with the formalities, waited for our turn for the Gamma-ray treatment. We were third on the roster and were the last one to be operated that day. The two patients before us were all prepared for the process which normally takes 2-3 hours. The first patient was an elderly gentleman in his late 60’s. The second patient as per my perception was a ‘teen-aged BOY’who was all set to enter into the OT once the first patient was out. He was good looking, bit healthy with a very infectious smile on his face, fearlessly waiting along with his mother for his turn. The ‘human’ inside me instigated me to say hello to his mother and convey my good wishes for her son’s operation. The moment I, extended my greetings and wishes for his smooth treatment, the red bulb outside the OT dimmed out and the first patient came out with a smile on his face. The first operation of that day was successful which gave me and mother in law a positive sign and our nervousness was somewhat relieved.

Just then a nurse came out with a register in her hand and announced, “Baby Shahsi – please come”. Within no time the second patient of the day, to whom I assumed to be a “teenager”, & to whose mother I had extended my wishes was all there in front of the OT, with his mother all tensed and sincerely praying to God for her child’s successful operation. After that, the nurse accompanied the boy inside the OT and requested the mother to stay back. By then, I was extremely curious with the announcement of the name of the second patient as “Baby Shashi”, whom I perceived to be a “teen-aged boy”. I could not hold my curiosity and went to his mother for my answer. After a brief discussion, I came to know that the second patient of the day whom I had perceived to be a “teen-aged boy” was actually a “six-year-old little GIRL” suffering from a pituitary tumour which had completely damaged her pituitary gland. And due to this hormonal disturbance, her growth hormones were abnormal for which she looked like a teen-aged boy!

My sense organs could not believe what I had heard, as I was so very obsessed with what I saw! For me, it was very hard to accept that what my ‘eyes’ saw was wrong! And exactly at that divine moment, I encountered my first enlightenment of spiritual wisdom which enabled me with a message that, “Perfection is beyond Perception”!!

We frequently jump into conclusion and judge people so quickly, and also, stick to it lifelong and presume what we think is always right. But this is not the fact. The truth is beyond the reach our five sense organs and we still strive to have the sixth one i.e. ‘the third eye’! People like ‘Shashi’ can’t have a label on their forehead all the time telling/stating what they are going through. Let’s learn to be a little more patient before perceiving someone. Why do we need stickers to be patient with people? Will we be more patient and kind with others if they had a label pasted on their foreheads? Labels like …. “suffering from tumour”, “fighting cancer”, “going through a bad relationship”, “lost a loved one”, “suffering abuse”, …..and so on.

Everyone is fighting a battle we know nothing about. The least we can do is be patient and not to stick to our perception as ……. “Perfection is Beyond Perception”! 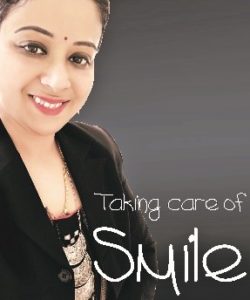