Case Study: A multinational giant ABC Ltd has implemented bell curve in their performance management system towards their aim of being a performance centric organization. However, after implementing bell curve they found out:

Because of above actions:

A. Huge employee resentment was created – mainly in above average performers. They   got a feeling of injustice.

B. Also, average n below average employees are now bearing a feeling of job insecurity in their mind.

According to you, what should the company have done to avoid such consequences?  And, as the damage already happened, what sort of damage-repairing can be done?

What is Bell Curve System in PMS?

This system of performance appraisal is a forced ranking system, which segregates the employees into the categories of best, mediocre and worst according to their performance. The rationale is that the organizations nurture their best employees and discard the worst employees.  Bell curve implies managers to take a decisive stand in ranking their employees and putting them into a definite performance slot. However, this is a controversial matter; because, it compels a manager to use forced rating instead of a fair one in most of the cases.

The Generic negative consequences of the system: When an organization makes decisions on the basis of numbers and models, there are fair possibilities of leading to an unholistic result. The model has many loop holes as an instance, with regard to the parameters deciding the quotient of performance – who decides the quotient and on what basis, variables were taken in account. Distrust and insecurity makes the company sets it performance and at almost the rock-bottom level. It’s not only the people who are shown doors, but even those – who exist – will be subconsciously turmoiled at every incident related to their performance. 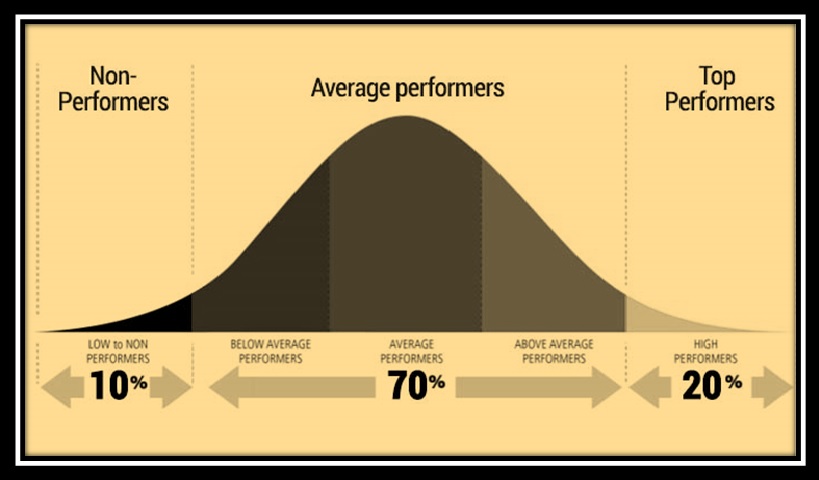 If the second instance (which is putting a person in an inappropriate role) is true, then here ‘Management’ is at fault. There are multiple options available to assess the true potential of employees and ‘Management’ can make the best use of the available options. These employees can be shifted to the roles where their potential can be adequately realized. In that way, the organization as well as the non-performer employees can have a symbiotic bonding – a win-win situation. However, for the other option – which is, certain employees are lazy –  and the other team members know that ‘Management’ had done enough to improve their performance and still nothing worked out, then they will never go against ‘Management’ and no resentment / job insecurity will creep in their mind.

Course Correction when the ‘Damage’ has already been taken place:

In this scenario, the company should look at a short-term and long-term strategy.

As an immediate short-term strategy:

It should take care of the concerns of above-average and below-average employees.  The company may reverse the decision to lay off the people, who are non-performers. They may decide to retain the employees who have moved to non-performers category for the first time.

As a long-term strategy:

Implementation of 5 Rating Bands: They may consider implementing this system to make a performance differentiation in a focused way. This process breaks down the organizational vision, mission, strategy and business goals into divisional, departmental and individual KRA level. The distribution percentage should also undergo a change.

Attention to be paid to a few important pointers:

Measures other than 5 Rating Bands:

Task Orientation – action from the end of HR & LnD:

One of the unnoticed yet concerned areas is piled up tasks due to employee worn-out. Temporarily, those excess tasks can be handed over to the happy employees who are in the top band of PMS, to manage the crisis situation. As a long term policy, HR team has to be proactive to keep a talent pool with reserve potential ready and to hire from there. The L&D team should be fast enough for the induction of the new joiners and further training to the remaining existing employees about crisis management and change management making them understand the weight of the extra load and added load of the next year.

Alternative of Bell Curve in PMS:

The ‘Bell Curve’ has outlived its purpose with maturity cycles of business expansions. Organizations used the bell curve more to operate from Distribution of Poverty (DoP) rather than Distribution of Abundance (DoA). Bell curve appraisals are gradually becoming irrelevant to many parts of the world. In Indian context, it is very different. We cannot categorically state that we can replace bell curve only with high achievers, 360 degree or balance score card at all levels across industries and across geographies in India. The composition of population in manufacturing industry is very different from the other industries. Therefore, generic benchmarking is a challenge. High performers in knowledge industry are different breed compared to high performers in skill intense environment. Each industry has to set up their performance Management System according to their nature and composition of the workforce – skill or knowledge or a combination of the both. Each individual methodology has its own advantage as well as limitation. Open transparent communication and giving employees a feeling of importance are the keys to success. An approach for blue collared worker is based on Long term Settlement (LTS) and is generally not based on performance, even though they are called PMS. The difference of payout marginally changes for workers. The respective ‘Learning & Development Team’ and ‘Human Resource’ team have to customize appraisals to the one which is robust, dynamic and unique to the organization basis the social and economic composition of the talent pool.

Concept: Mr. Surya Prakash Mohapatra – Founder of L&D Global Community, which has a presence across the nation , as well as abroad.

Sincere Thanks to dignitaries of L&D Global Forum across the nation, in acknowledgement of their invaluable perspectives: